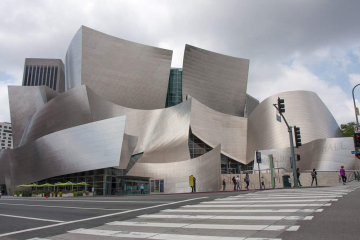 Bunker Hill is a historic prominence that traditionally separated Downtown Los Angeles from the rest of the city to the west. Many of the older buildings and the early high-rises surrounding Bunker Hill went through re-development from commercial to residential.  It is the home of the Walt Disney Concert Hall and Cathedral of Our Lady of the Angels, and the Museum of Contemporary Art. In February 2007 $2.05 billion was approved for the Grand Avenue Project, which over the next 10 years will bring in over 2,000 new residential units, 1 million square feet of office space; a Mandarin Oriental hotel; 600,000 square feet of retail and entertainment space; and the Grand Park, connecting City Hall to Bunker Hill.